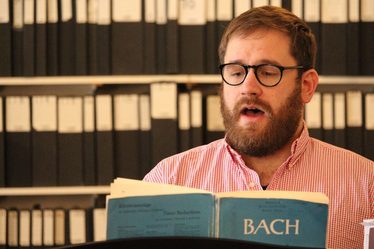 Composer Adam Jacob Simon (b. 1987) has enjoyed many recent performances and commissions from nationally acclaimed ensembles including Lorelei Ensemble, A Far Cry, Palaver Strings, Conspirare, Seraphic Fire, WordSong Boston, and the Oriana Consort. His music has been praised as “…full-throated and exhilarating…” - The Boston Globe and "...swept with a mercurial traversal of emotions…” - The Boston Musical Intelligencer. In 2010 he won the St. Botolph Club Emerging Artist Award to record his String Quartet #1 with the Mt. Auburn String Quartet, founded by popular Boston cellist, Rafael Popper Keizer.  His compositions are regularly performed throughout the US and Europe.


He is an accomplished singer as well, recently performing the tenor solos in Mozart’s Mass in c minor with the Onion River Chorus in Montpelier VT. His voice is described as having a “wonderful romantic lyricism” and “reassuring warmth” - Times Argus. Recent solo highlights have been the tenor Evangalist in Arvo Pärt’s “Passio” and baritone in Duruflé’s Requiem with the Trinity Church Choirs in Boston, where he serves as staff singer.


He is an avid folk singer performing frequently with VT based vocal ensemble Northern Harmony, traveling throughout Europe, South Africa and the U.S. As co-founder of the folk music duo “Sophie et Adam” alongside French mezzo-soprano Sophie Michaux, he frequently performs a varied repertoire of European and American folk music.


Adam is currently pursuing a Master’s degree in Composition at Tufts University in Medford MA, studying with Boston composer John McDonald. He completed his undergraduate studies at the Longy School of Music in Cambridge MA, studying composition with Howard Frazin, and music theory with Judy Ross.  Adam was born and raised in Cambridge MA, where he still resides.